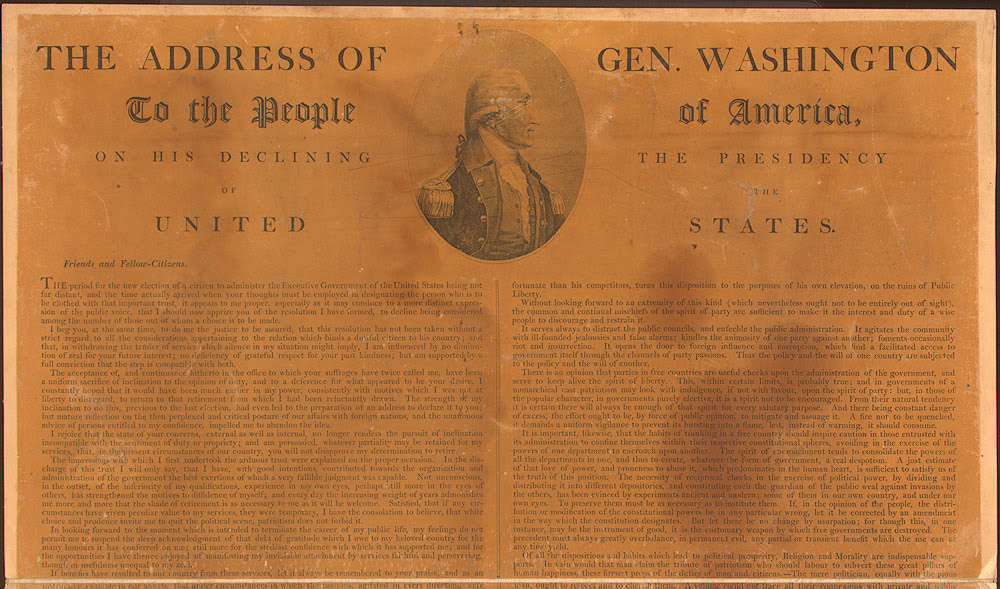 Citizens by birth or choice of a common country, that country has a right to concentrate your affections. The name of AMERICAN, which belongs to you in your national capacity, must always exalt the just pride of patriotism more than any appellation derived from local discriminations.

The Unity of Government which constitutes you one people is also now dear to you. It is justly so, for it is a main pillar in the edifice of your real independence, the support of your tranquility at home, your peace abroad, of your safety, of your prosperity, of that very Liberty which you so highly prize.

Your union ought to be considered as a main prop of your liberty, and that the love of the one ought to endear to you the preservation of the other.

It is of infinite moment that you should properly estimate the immense value of your national Union to your collective and individual happiness; that you should cherish a cordial, habitual, and immovable attachment to it; accustoming yourselves to think and speak of it as the Palladium of your political safety and prosperity; watching for its preservation with jealous anxiety . . . .

THE HAND OF PROVIDENCE

No people can be bound to acknowledge and adore the invisible hand, which conducts in the affairs of men more than the people of the United States. -- Every step, by which they have been advanced to the character of an independent nation, seems to have been distinguished by some token of providential agency.

LIBERTY HAS A PRICE

You have in a common cause fought and triumphed together. The independence and liberty you possess are the work of joint councils and joint efforts, of common dangers, sufferings, and successes.

RESPECT FOR AUTHORITY; OBEDIENCE TO LAWS

This government, the off‑spring of our own choice, uninfluenced and unawed, adopted upon full investigation and mature deliberation, completely free in its principles, in the distribution of its powers, uniting security with energy, and containing within itself a provision for its own amendment, has a just claim to your confidence and your support. Respect for its authority, compliance with its laws, acquiescence in its measures, are duties enjoined by the fundamental maxims of true Liberty.

The very idea of the power and the right of the People to establish government presupposes the duty of every Individual to obey the established Government.

All obstructions to the execution of the Laws, all combinations and Associations, under whatever plausible character, with the real design to direct, control, counteract, or awe the regular deliberation and action of the Constituted authorities, are destructive of this fundamental principle and of fatal tendency. They serve to organize faction; to give it an artificial and extraordinary force; to put in the place of the delegated will of the Nation the will of a party, often a small but artful and enterprising minority of the Community, and, according to the alternate triumphs of different parties, to make the public administration the Mirror of the ill concerted and incongruous projects of faction rather than the organ of consistent and wholesome plans, digested by common counsels and modified by mutual interests.

Liberty itself will find in such a Government, with powers properly distributed and adjusted, its surest guardian.

It is important, likewise, that the habits of thinking in a free Country should inspire caution in those entrusted with its administration to confirm themselves within their respective constitutional spheres, avoiding the exercise of the powers of one department to encroach upon another. The spirit of encroachment tends to consolidate the powers of all the departments in one, and thus to create, whatever the form of Government, a real despotism. A just estimate of that love of power and proneness to abuse it which predominates in the human heart is sufficient to satisfy us of the truth of this position. The necessity of reciprocal checks in the exercise of political power, by dividing and distributing it into different depositories, and constituting each the Guardian of the Public Weal against invasions by others, has been evinced by experiments ancient and modern, some of them in our country and under our own eyes. To preserve them must be as necessary as to institute them.

DANGERS OF THE “SPIRIT OF PARTY”

The alternate domination of one faction over another, sharpened by the spirit of revenge natural to party dissension, which in different ages and countries has perpetrated the most horrid enormities, is itself a frightful despotism. But this leads at length to a more formal and permanent despotism. The disorders and miseries which result gradually incline the minds of men to seek security and repose in the absolute power of an individual, and sooner or later the chief of some prevailing faction, more able or more fortunate than his competitors, turns this disposition to the purposes of his own elevation on the ruins of Public Liberty. . . .

It serves always to distract the Public Councils and enfeeble the Public administration. It agitates the Community with ill founded jealousies and false alarms; kindles the animosity of one part against another; foments occasional riot and insurrection. It opens the door to foreign influence and corruption, which find a facilitated access to the Government itself through the channels of party passion. Thus the policy and the will of one country are subjected to the policy and will of another.

There is an opinion that parties in free countries are useful checks upon the Administration of the Government, and serve to keep live the spirit of Liberty. This within certain limits is probably true; and in Governments of monarchical cast Patriotism may look with indulgence, if not with favor, upon the spirit of party, but in those of the popular character, in Governments purely elective, it is a spirit not to be encouraged. From their natural tendency it is certain there will always be enough of that spirit for every salutary purpose; and there being constant danger of excess, the effort ought to be by force of public opinion to mitigate and assuage it. A fire not to be quenched, it demands a uniform vigilance to prevent its bursting into a flame, lest, instead of warming, it should consume.

Of all the dispositions and habits which lead to political prosperity, religion and morality are indispensable supports. In vain would that man claim the tribute of Patriotism who should labor to subvert these great Pillars of human happiness ‑these firmest props of the duties of Men and citizens. The mere Politician, equally with the pious man, ought to respect and to cherish them. A volume could not trace all their connections with private and public felicity. Let it simply be asked, where is the security for property, for reputation, for life, if the sense of religious obligation desert the oaths which are the instruments of investigation in Courts of Justice? And let us with caution indulge the supposition that morality can be maintained without religion. Whatever may be conceded to the influence of refined education on minds of peculiar structure, reason and experience both forbid us to expect that National morality can prevail in exclusion of religious principle.

'Tis substantially true that virtue or morality is a necessary spring of popular government. The rule indeed extends with more or less force to every species of free Government. Who that is a sincere friend to it can look with indifference upon attempts to shake the foundation of the fabric?

Can it be that Providence has not connected the permanent felicity [happiness] of a nation with its virtue?

Promote then as an object of primary importance, Institutions for the general diffusion of knowledge. In proportion as the structure of a government gives force to public opinion, it is essential that public opinion should be enlightened.

As a very important source of strength and security, cherish public credit. One method of preserving it is to use it as sparingly as possible: avoiding occasions of expense by cultivating peace, but remembering also that timely disbursements to prepare for danger frequently prevent much greater disbursements to repel it; avoiding likewise the accumulation of debt, not only by shunning occasions of expense, but by vigorous exertions in time of Peace to discharge the Debts which unavoidable wars have occasioned, not ungenerously throwing upon posterity the burden which we ourselves ought to bear. The execution of these maxims belongs to your Representatives; but it is necessary that public opinion should cooperate.

Observe good faith and justice towards all Nations. Cultivate peace and harmony with all. Religion and morality enjoin this conduct, and can it be that good policy does not equally enjoin it? It will be worthy of a free, enlightened, and at no distant period a great Nation to give to mankind the magnanimous and too novel example of a people always guided by an exalted justice and benevolence.

In the execution of such a plan nothing is more essential than that permanent, inveterate antipathies against particular Nations and passionate attachments for others should be excluded, and that in place of them just and amicable feelings toward all should be cultivated. The Nation which indulges toward another an habitual hatred or an habitual fondness is in some degree a slave.

Against the insidious wiles of foreign influence (I conjure you to believe me, fellow citizens) the jealousy of a free people ought to be constantly awake, since history and experience prove that foreign influence is one of the most baneful foes of Republican Government . . . .

I hold the maxim no less applicable to public than to private affairs that honesty is always the best policy.